Christopher Leebrick began performing as a Storyteller at the age of 13.  As a member of Robert Rubenstein’s nationally recognized “Troupe of Tellers” (Roosevelt Jr. High, Eugene, OR), Chris spent his 8th grade year performing at elementary schools, libraries, nursing homes, and on local television.  He became a professional storyteller in 1986 while he was a theatre student at the University of Wisconsin–Milwaukee.  Since then he has given over 2,000 storytelling performances from coast to coast at festivals, theatres, conference halls, schools, libraries, churches, at an ancient Roman ampitheatre in France, and on a boat in the Sea of Galilee.

Utilizing a rich flexible voice, a dynamic stage presence, and powerful acting, Chris brings the ancient art of storytelling alive for each and every audience member. Carefully tailoring each performance to suit the audience and the event, he also sets the mood for many of his tales with instruments such as the harmonica and the eastern cedar flute. Chris is also a teaching artist and a professional actor.  As a teaching artist, he offers residencies, workshops and private instruction for children and adults.  Subjects include storytelling, acting, and Shakespeare.  He has served on the roster for arts councils across the

state (including the Regional Arts & Culture Council, Young Audiences of Oregon, Lane Arts Council, Columbia Gorge Arts Council, and the Salem Arts Association).  As an actor, some of Chris’ stage roles include Fagin in “Oliver!”, the title roles in “Macbeth” and “Dracula”, and a one-man performance of the story of Jesus entitled “Dawn of the Messiah”.  Chris is also the former artistic director and co-founder of the Lord Leebrick Theatre Company in Eugene, OR (now called Oregon Contemporary Theatre ), currently in its 26th season.

Christopher’s CD’s:
All three of Chris’ CD’s, “Good Stories From All Over”, “Critters, Kids, and Cowboys”, and  “Spoooky!” have received national Storytelling World Awards.  When he isn’t on the road sharing stories, Chris resides in Oregon’s beautiful Willamette Valley with his wife and two children.

“Storytelling may be the world’s oldest art form. The need to hear and tell stories is inherent, and through the power of story we can grow in our understanding of what it means to be human.” — Christopher Leebrick 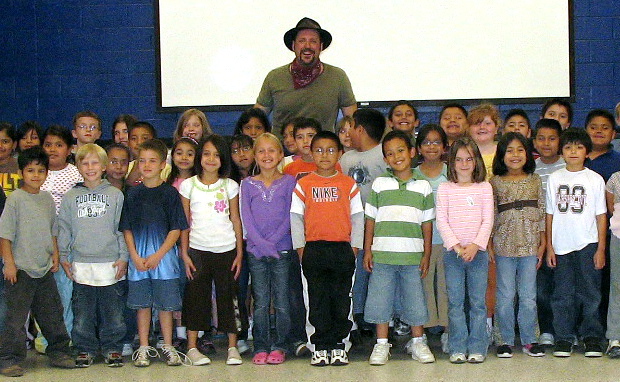 What Folks Are Saying About Chris:

“The best storyteller I have ever seen . . . . Chris made our celebration of literacy one to remember.”
— Larry Soberman, Principal, Twin Oaks Elementary, Eugene, OR

“The children of Harney County are still raving about your performance! . . . .  They think of you as their new friend . . . . . Come again soon!”
— Suzanne Yeakey, Librarian, Harney Co. Library

“That was the best assembly we’ve had in a long time!”
— Wayne Osborn, Librarian, Hillside Elementary, Ft. Lewis, WA

“It was a great assembly, one which our kids won’t soon forget . . . . it took the imagination of our students to higher levels.”
— Mr. Potter, Teacher, Oakgrove Elementary, Milwaukie, OR

“He is the best storyteller I’ve seen when it comes to performing for elementary kids . . . . Our kids were mesmerized.”
— Kimbre Chapman, Librarian, Caldwell Library, Idaho

“It is wonderful to see a master storyteller like you capture the imagination of everyone in the conference.”
— Mike Schulz, Director, Western Montana Storytelling Conference

“He is of the same caliber and comparable to many of the fine artists I observed at the National Storytelling Festival in Tennessee.”
— Susie Risho, StoryKeepers Festival, Missoula Montana

“As a storyteller he commands a powerful presence.  His nuances and gestures are extraordinary!”
— Mabel Kaplan, Festival Coordinator, Australian National Storytelling Festival

“I really enjoy Chris’ storytelling style. . . . he really believes in the stories he tells and I admire that.”
— Edward Faraci, Storyteller & Teacher, Queensland, Australia

“Chris redefines the whole art of storytelling into a wonderful evening of fine acting and a sense of flow that exhibits a keen sense of drama, comedy, and even pathos….”                    — Prof. Paul Smith, John Brown University, Arkansas

Performances for All Ages:

“Leebrick’s style is very expressive, lively, and quite enjoyable for young and old alike.”
— River Reflections Newspaper, McKenzie Valley, OR

Chris totally captivated the children, but what was even more amazing was our parents reaction . .  ‘not a creature was stirring, not even a mouse (or a parent)’ . . . All of the audience was enthralled!”
— Block Graphics, Xmas Party, Portland, OR

“Wow!  What great performances Chris gave.  Teachers were raving and so were the kids.”
— Greta Simonson, Librarian, Davis Elementary, Portland

“Chris’ tales appealed to ‘kids of all ages’ . . . there was something for everyone. . . . it was probably the single most well attended program we’ve had here at the library.”
— Nancy Angelesco, Librarian, Langlois Library, OR

“You gripped the audience from start to finish . . . .  You held both the children and their parents enthralled.”
—Perii Owen,  Librarian, Ashland Library, OR